Stupid Idea, ahead of its time or just waiting for the right person?

From time to time I blog about non photographic or work related topics and this one has been on my mind for some time. As you may have guessed not the world’s greatest author, so no best sellers in my future.

What Society in general still doesn’t seem to grasp is that there are some people out there who think and see the world in a very different way to most. I am not talking about geniuses but rather people who for lack of a better description, seem to be running slightly different operating systems and who come up with the most incredible and often “impractical” ideas. The problem as I see it is that society likes people to conform and doesn’t like out of the box thinking or thinkers and often misses a very crucial point.

Are the ideas actually crazy and impractical or is there simply no one in the audience who knows what to do with them or how to implement them?

Let’s take the following story as an illustration.

The head engineer of a company came up with a brilliant idea, crazy, ahead of its time but potentially brilliant. Marketing loved it, the Board loved it, they sunk millions into hiring and R&D and when it failed, the new replacement CEO labelled it as a stupid idea, an impossible dream and set about saving the company.

How the documents ended up on a junior engineers desk no one knows.

Having only been at the company for a week, he didn’t know the history or that this was impossible to do, he assumed it was some kind of test and eager to please he dove right in. He could only assume that the over complicated calculations were meant to confuse him so he started from scratch and a week later he delivered the completed project to his division head.

No one in the company could understand how a single person, a junior at that could do what a whole team with millions couldn’t.

The answer is quite simple, bring the right idea together with the right person, someone who knows how to do what is needed and quite often the impossible becomes relatively easy.

So once again we face a problem in the society we have created.

The type of thinker Elon Musk referred to on twitter as being in short supply are actually not as rare as one might think, they are just shunned or beaten into conforming by society. I know this to be fact because I think a lot like these people, making leaps to wonderful ideas with no science, calculations or research to back it up.

As an example let’s say I went to the electric car industry and told them the problem isn’t the batteries, it’s the motors or rather the electromagnets in the motors. With the ways things currently are, understandably an idea needs to be backed up by proof and research.

If I go to Elon Musk and tell him that the problem with his motors is that he only has windings on the outside and that to boost the efficiency he needs conductive pathways within the metal itself it’s just another crazy idea, one that has no scientific backing and will bring a host of criticism from those who will just dismiss it.

Even if I said that while I can’t tell you exactly how to do it, I know it will work and I can see it, it’s still not something you can take to the bank. Then there is the problem of getting the attention of someone like Elon Musk in the first place but Elon, if this does ever reach you, seriously, the problem is the magnets not the batteries.

It’s the type of idea that doesn’t need a thousand people shooting it down, and there will be thousands but it needs one person who immediately gets it and knows exactly what to do with it.

While understandable, corporate secrecy often works in a counter-productive manner because it often stops the ideas getting to those who are best to work on them and in the end costs more to develop or the project fails.

Just because general society doesn’t get how these thinkers think doesn’t mean that their ideas are no good, it means that society needs to find a way of finding the thinkers hidden in our midst, coaxing them out of hiding challenging them, supporting them encourage them to think and the big challenge is to find a way of bringing the right thinkers and right implementers together.

Well those who have tasted my biltong seem to be coming back for more, which is a good and a bad sign. It’s a good sign because as I suspected, they agree is better that the shop bought stuff but it’s a bad thing because it’s still reasonably expensive to make and I am not geared up for production and I don’t have the time to make it in bulk or sell it.

To this end I thought I would share my recipe so you can all start making your own. All you need is a Mellerware Biltong King that you can get from the likes of Yuppichef. 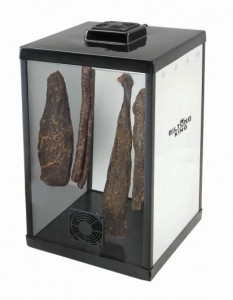 As far as the choice of meat goes, I feel rump is by far the best cut. You don’t need A grade rump, B grade will do because the marinating process will also tenderise it so its saves some money.

The rump should be cut into strip gutting with the grain. The thickness of the strips depends on whether you want fat or not. If you opt for lean biltong, cut the meat into strips about 1- 1.5cm . This will take around 2-3 days to dry.

If you like fatty biltong, cut the meat around 2cm thick so that there is extra drying time required which gives the fat time to cure properly, probably 3-4 days.

Making the biltong is really easy this makes around 4-6kg’s.

Make sure that fly’s do not come into contact with the meat at any stage… If you find your biltong is a little too salty, you can add less salt next time.

Once you have made the biltong, you can always freeze it in the unlikely event you don’t eat it fast enough 🙂