Category Archives: How I did

I give you Speedlight Girl 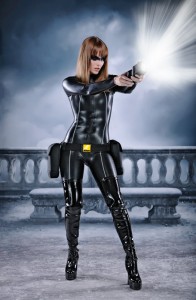 The image seems to be causing quite a stir and also I am getting lots of people asking how it was done so I thought I would share some of the behind the scenes in this post, the full behind the scenes with video footage etc will be on the DVD.

So it all begins like any good shoot with a plan.

When I plan a shoot I spend time really thinking through every aspect of it including things like wardrobe, set, lighting, props etc.

So let’s run through the checklist.

The costume was going to be the centre piece of the shoot and would actually double up for two shoots that I was going to do, Speedlight Girl and a mildly Fetish style pinup. 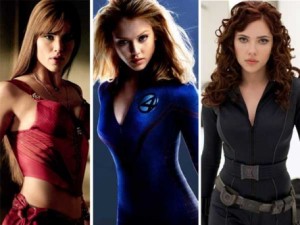 I found some references online and then handed them to Simone from Eden Wear to work her magic. I must say she exceeded expectations 🙂

As for props, all we really needed was a Tomb Raider style belt holding Speedlight pouches so not much to worry about here.

The set is often something that gets overlooked, left till the end or composited in later but nothing beats having a proper background and not having to deep etch, especially if your model has light hair. Most people really don’t realise how easy it is to create a believable set and to fool a camera.

When I am designing a set I always begin with the background and I have built up quite a library of sites where I can purchase images that are licensed for use in this manner. For this shoot I decided on a moody balcony scene. Now it’s not a train smash if the background is a little pixelated when you blow it up to the size you need for the shoot because we can just blur it a little so we don’t see pixilation and let Depth of Field take care of the rest for us. 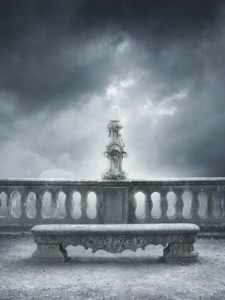 OK so we have the background but in real life scenes are not just a background, they include foreground and  more often than not, an image we uses doesn’t include a usable foreground for the model to stand on. This is where we get sneaky and remember that a camera cannot see 3D and we can use this to our advantage buy using something that has an illusion of texture.

If we look at the background image it looks like the ground is a rough concrete texture and the first thing that comes to mind for me is fabric. Yes you read correctly fabric and remember it doesn’t have to have actual texture, it just needs to fool the camera into believing it has texture.

As you can see from the following image, we have the background hung and the fabric stretched out on the floor. There is a little bit if a colour difference, a bump at the transition and a sudden change in texture but that will be easy to fix in post. The most important thing is that it looks believable. 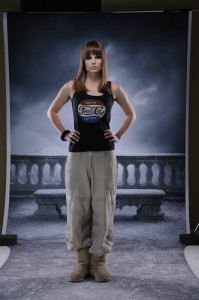 The final piece of the puzzle is lighting. I find that most people tend to come totally unstuck at this stage because really they panic and try over complicating everything. Again I start by going to actual locations or the web and looking at references, in this case comics and illustrations.

I pretty much decided on a 55cm beauty dish as my key light and where as I would normally start here, in this case I worked a little differently. I was using a paper print, not a translight for this shoot so I needed to light my background. At the same time I wanted rim lights to highlight my model which means I would have needed 4 lights unless I got clever.

By clever I mean using the same light to act as a rim light and a background light. A few people said it wouldn’t work because the rim light would need to be too powerful and would blow out the background and I theory they are right except that I was thinking inverse square law 🙂

This is really where you want to use a light meter and low and behold, by adjusting the light so that I got f/8 on the model the background was pretty much f5.6. The lighting I used here was a mono light with a 2m strip box but no grid as I want the light to spill onto the background. So now that I had the basic set-up it was time to work from the front backwards.

Don’t try work with all your lights at the start, but rather turn on one light at a time so that you can see how your lighting is changing.

So starting from the front and working backwards. The front and in this case key light was an Elincrhom Quarda pack with a 55cm beauty dish. It was located above and in front of the model on a boom and adjusted to produce f/8. I could have used all Speedlight’s for this but continually fighting with Speedlights to get enough power really does distract you from just getting down to the job of lighting. 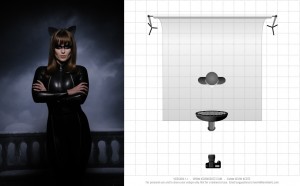 I knew before I even started that I would need bottom fill but I was only going to worry about that once I had moved onto the next set of lights which were the rim and background lights. 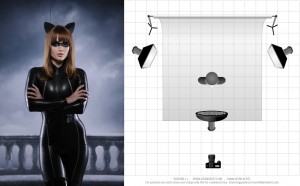 If you compare the two images, you can see how much extra light there now is on the face and that’s what I wanted to see before deciding on where and how high to place my fill lights. 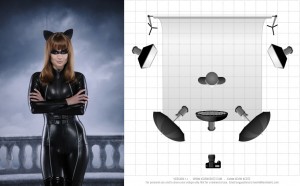 So the fills, SB-900’s with bounce umbrellas at ¼ power were placed in front of the model, low down and at about 30° from the camera, still leaving good definition on the face but opening up the shadows under the nose, eyes and chin.

So here we have the final shot out of camera. 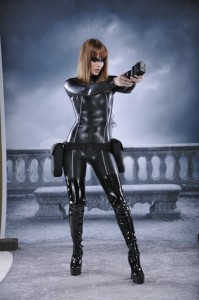 I opted not to shoot with the Speedlight on to ensure I didn’t have to worry about flare and chose to rather add the light beams in later. A little bit of contrast, smoothing, and touching up the background and we have the final image. The important thing to notice is that most of the ground work for this was done in camera as IMO you can do a lot in Photoshop but great images already have most of what’s needed out of camera. 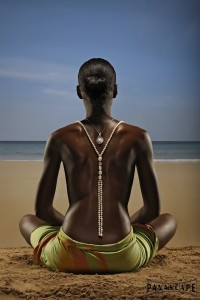 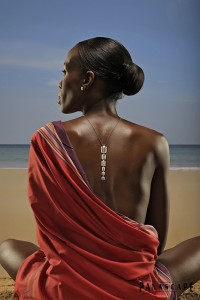 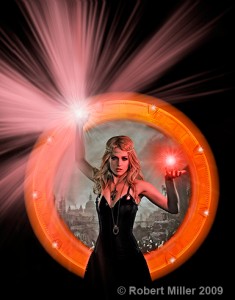 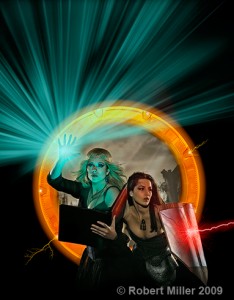